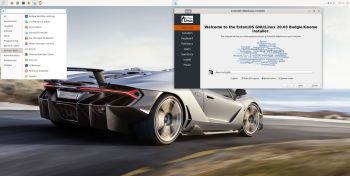 NEWS 200319 ABOUT Exton|OS with Budgie Desktop 10.5, Gnome 3.36 and Refracta Snapshot
The Desktop Environment in this Exton|OS build is Budgie 10.5. Budgie is focused on simplicity an elegance. Designed with the modern user in mind. Gnome 3.36 has also been installed. It was released 200311. Program content in build 200319: Refracta Snapshot, Calamares 3.2.20, Firefox, Gimp, SMPlayer, SMTube, and GParted. Also all necessary additions in order to install programs from source. Calamares is an installer framework. By design it is very customizable, in order to satisfy a wide variety of needs and use cases. Kernel 5.6.0-rc6-exton (corresponding Kernel.org‘s latest kernel 5.6-rc6) is used. Kernel 5.6-rc6 was released 200315. All packages have been updated to the latest available version as at March 19, 2020 Study the NEW PACKAGE list. Google Chrome has been removed since it’s now possible to use Netflix in Firefox. Using Refracta Snapshot you can change everything to your liking and create your own live installable Ubuntu 20.04 system. I mean create your own installable Ubuntu 20.04 LTS Live DVD once you have installed Exton|OS to hard drive. Ubuntu 20.04 will be supported until April 25, 2025.

MOST IMPORTANT CHANGES IN BUILD 200319
1. This Exton|OS version is for efi computers. You can nevertheless use the Calamares Installer in VirtualBox/VMware and thus install Exton|OS in any language. You can even use Calamares for installation to a USB stick and that way get persistence. Please read my instruction before you perform such an installation. Calamares Installer replaces Ubiquity (Ubuntu’s installer). Calamares Installer is also very simple to use. No “expert knowledge” is needed.
2. A brand new kernel – 5.6-rc6 – is used. With Windows exFAT file system support.
3. The very nice icon theme Papirus is installed and used.
I haven’t changed the wallpapers since it’s hard to find nicer ones.

What’s new in kernel 5.6? – The most exciting kernel in years!